Movement in a Wheaten 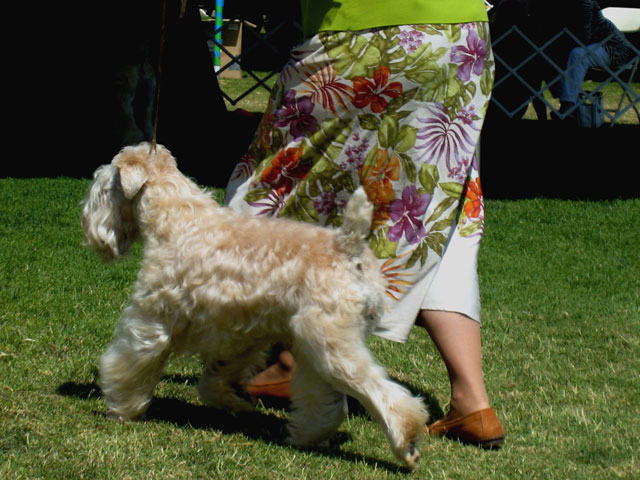 Soft Coated Wheaten Terriers are considered working terriers. Being all-purpose farm dogs, they were able to herd, hunt, and guard. Originally, they worked the day long, doing one chore after the other.

In order to do all of these things, a dog must be built properly with enough bone, and depth of chest. He must also be able to cover ground efficiently and smoothly, with the least amount of effort, therefore conserving his energy for the tasks facing him.

And finally, the front legs should extend beyond the nose. Correspondingly, the rear legs should come forward, well under the body, and extend out well behind. Take a look at the dogs in the ring sometime. You will see some dogs will take twenty steps to keep up with a dog that only takes ten or twelve steps to cover the same amount of ground. Those mincers have to work almost twice as hard to cover this ground, and they will tire that much sooner. The mincing might be caused by a number of problems. Perhaps angulation, front and rear, do not match. Perhaps the dog elbows out, so the rear takes smaller strides to balance. Or, perhaps the dog is sickle hocked in the rear, so the front compensates. Sickle hocks are like stiff hocks, which never lose their angle as the dog moves. The hocks don’t extend out behind, and push the dog forward as he moves. In some cases, the dog can look like those old paddle-wheel boats — as the back legs go forward and hit the ground, as the leg rises behind, the hock is still bent as in standing position, so it goes up higher then back down, creating a circular motion, rather than a driving motion.

When a dog comes toward you, his front legs should come easily forward in a straight line with no high upward motion, no elbow-popping, and no winging. (Winging is when the front legs swing out in an arc, then come back to the center of gravity.) One should never be able to see the front pads, on a correctly moving dog. The front legs should remain in the center of gravity; i.e. they should not be moving with any noticeable width between them. It should look as though the tops of front legs are coming from the sides of the neck, rather than from the outer sides of the shoulder. Any of those traits would be more wearing, and curtail his endurance. As the speed increases, the center of gravity will naturally come closer. It is normal for the front and back legs to verge toward the center. This is not to be confused with moving too close. And they should never cross over each other.

Earlier, when Wheatens were first recognized, our breed had a problem called bent tibias. The rear was shaped more like a light bulb, although the hocks were not pointing at each other, they were perfectly parallel. There was more space between the knees because the tibia, the bone from the knee to the hock, was bent and pushing the knee out. I have not seen that for a while. Perhaps clever grooming has prevailed, though I have not been seeing litters with the problem.

Wheatens have been notorious for moving close in the rear. I believe we have seen improvement overall in this category… at last! Perhaps we are still closer moving than some would care to see, but I have noticed better and wider rear movement.

A dog can move too wide in the rear, just as he can in the front. Again, it is inefficient, as this causes a dog to shift his weight from one side to the other. This lack of a center of gravity will tell on his endurance.

Overall, proper movement should look effortless and fluid. The dog should cover a lot of ground. I like to see lightness to the step, implying agility and grace. There should be minimal bumps, bounces, or bulges to distract the eye. It should just flow.