How To Keep That Puppy In Its Home! 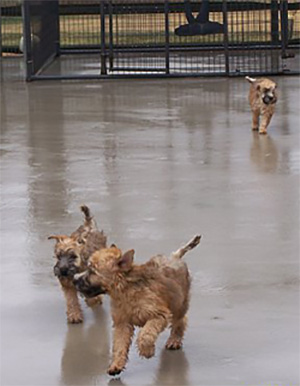 Many times new puppy owners have told me that they had no idea what they were getting into when they brought that adorable, fuzzy puppy into their home and that they wished the puppy had come with an Instruction Manual! Well, maybe puppies should come with an Instruction Manual! When you watch that little puppy you bred be carried out the door by the new owners, you probably feel some sadness, but also the expectation that the puppy is going into a loving, forever home. It is weeks or perhaps months later that a trainer is contacted by frustrated owners in an effort to gain some sanity and prevent that puppy from being rehomed. The major problem is that new owners are unprepared and uninformed about the responsibility of being dog parents. As a trainer coming into this situation and seeing the problems that exist, I feel that there are a few things that breeders could do to ease the stress that new owners experience. You can actually provide the new owners with an “instruction manual” for the puppy!

Breeders are held in esteem by the new puppy parents and can be influential in getting the people off to a good start with the puppy. In fact, other than the veterinarian, the breeder may be the only source of information. Please don’t make the assumption that the people are knowledgeable about dogs, dog behavior and dog training. This assumption can lead to serious consequences, such as the dog losing its home, because the people are probably not informed at all, or if they have any information, it is erroneous and can lead to disastrous consequences. If the breeder would provide the people with good, solid information, many later problems could be averted.

Problems experienced by the new owners can be broken down into two major categories: behaviors stemming from lack of socialization and difficulties with house-training.

Proper socialization is one of the most critical elements in a dog being successful in its home environment. There is a very brief period for socialization; while there is some disagreement on the exactness of this period, it is generally believed that the optimum period for socialization is from three weeks to sixteen weeks. This is a very short period of time! Dr. Ian Dunbar, a renowned veterinarian behaviorist and founder of the Association for Pet Dog Trainers, has stated that during the first three months of a puppy’s life, that puppy should meet one hundred people! Socialization effects the level of self-confidence, a key ingredient in a well adjusted puppy. A confident puppy learns faster, meets people more readily and is interested in new experiences. In contrast, the fearful puppy learns more slowly, is afraid of new people and novel experiences. This fear can lead to aggression because what is not familiar can be fear inducing. A fearful dog in the home is a very difficult problem for any owner, especially a novice owner.

Because the critical period for socialization is so brief and yet so important to attaining a well adjusted puppy, it is important that breeders begin at a very early age handling the puppies and having new people meet the puppies. I realize that some breeders are afraid of their puppies contacting Parvo; however, more dogs die from lack of socialization than ever die from Parvo. Research done by the University of Pennsylvania suggests that provided the puppies are actively engaged in an active immunization program, some exposure to “street” virus, provided that it does not come because the dogs were exposed to critically ill animals, may be beneficial in boosting the puppies’ immunity. Enlist your relatives, friends, and neighbors to meet and handle those very young puppies so that puppies think that people are wonderful. Introduce the young puppies to well-behaved children, too. Some breeders put the puppies in the car and take them shopping in a shopping cart! Great socialization! Some introduce the young puppies to tunnels for agility. What fun that is for a puppy! Introduce the puppy to stairs and different substrates such as carpet, tile, cement. While these things take time and effort, the payoff for a successful life for the puppy is boundless.

Dr. Dunbar feels that litters are best reared in a relatively high traffic area in the home, such as the kitchen or family room, but definitely not in kennels, garages or back rooms. This allows exposure to normal daily activities such as vacuums, kitchen appliances, TV, conversations, etc. By rearing the puppies in this active, social environment, the puppies would already have exposure to these situations and make adjustment in the new home easier.

The age at which a puppy is adopted can also impact success. Puppies adopted prior to seven weeks can have more problems with biting, fear, excessive vocalization and separation anxiety. Puppies adopted at three months or later can be more aloof and not as easily socialized. Dogs go through several fear periods, a time in which a puppy can be easily traumatized. There is a fear period at eight weeks so eight weeks is not an ideal time to adopt a puppy. This would certainly not be an appropriate time to ship a puppy!

Housetraining is another area that presents major problems for dog owners. Young puppies can form a firm substrate and location preference for elimination by 8 1/2 weeks. Therefore, when puppies are young enough to begin to maneuver, it is important to allow them access to an area to eliminate outside of where they are sleeping.

New owners seem to not have a clue as to how to house-train a puppy and often think that the puppy will house-train himself or that the older dog in the household will house-train the puppy. Seldom does the owner seem to realize that it is the role of reinforcement on the part of the owner that housetrains the puppy, as well as constant supervision and management. Please go over the importance of positive reinforcement with the new puppy owner and explain that it is important to put the puppy on a schedule, go outside with the puppy every time, and give the puppy lots of praise the second he finishes! Advise against sticking the puppy’s nose in it (Yes, there are still people that do that!) or other forms of punishment. Positive reinforcement is the key.

Demonstrate for the people how to groom the puppy and suggest the type of brush to buy. One of my clients had been told by the adult daughter of her Wheaten breeder that Wheatens don’t need grooming and so by the time I arrived on the scene, the poor puppy’s coat was getting in very bad shape.

Explain that dogs need and want to be part of the family. They love to go places and do fun things as part of the group. Dogs that are left alone a lot or left out in the back yard will likely have behavioral problems such as barking, running the fence, or destructive behaviors.

In summary, breeders should begin the socialization process very early and stress to the new owners the importance, as well as the significance, of continual socialization. Provide the people with concrete information regarding the responsibilities of being new puppy owners. Be sure they understand they are taking home not just a cute, fuzzy teddy bear, but a living creature that has needs and requires a lot of work. By taking this extra step, the success of the new relationship would be much more secure.